UCSD Men's Club Volleyball Strikes Back for the MLK Invite

After a long hiatus away from competition with other universities, UCSD Men's Club volleyball made their first long-awaited appearance at the 2022 MLK Invite. This time, however, they came with a new addition: the brand new C team!

Day 1 saw all 3 teams compete in their pools. Unfortunately, due to many players across the program needing to complete their Covid Return to Play protocols after the large spike around Christmas, all teams were left shorthanded in some capacity. However, that didn't stop the 3 squads we brought out from putting on quite the show.

Our A team started Saturday off strong with two very decisive 2-0 wins against Metro State and UCR's B team, with UCR-B scoring the most points of any of those sets at only 18 points. However, due to an unfortunate serving run by UVU-A, our A team lost their last game in 3. While it was a sad loss, it definitely didn't sting too bad knowing that we had players playing out of position due to the shortage of players.

The B team didn't start off too strong on day 1, with an unfortunate 0-2 loss against UCR-A. However, they put up a good fight against the defending national champions, Cal Poly's A team, scoring 18 and 19 points in the two sets they played. To end the day off, they pulled off a clutch win against UCSB-B, a historically strong program, in 3 sets. Given the circumstances with important pieces missing, the close fights still felt good and showed that this is a B team with a lot to offer.

In my honest opinion, the C team was the Cinderella story of this tournament. Only entering the gym with 6 players, 3 of whom we borrowed from the B team, we knew we were going to have a tough time going in. To make the struggle even harder, our middle-playing-outside-for-today went down during the second point of the first game against UVU-B when one of their outside hitters came down on our side of the net (dang it!). This meant that we had to go forward through the rest of the tournament with only 5 guys. Now you may be wondering how this worked, which is a good question. Basically, there was a 'hole' on the court in one of the positions (we started with it as a middle, but then moved the hole to the right side), and whenever that position in the hole would go back to serve, it would have the effect of a missed serve, automatically losing us a point every 6 rotations. Struggling to figure out how to arrange our defense around the hole, we lost our first match against UVU-B, but only barely. Next, we had to play ASU-A, which is a historically strong program that we realistically didn't expect to do well against. However, much to our delight, we managed to take 18 points off of them in the second set against their staters! Our third game was against CSUSM, who we've scrimmaged before, but still struggling with 5 players, and 2 of them out of position, we unfortunately lost 0-2. While we went 0-3 day 1, the C team was far from giving up, and the 5-man team turned out to be the fuel we needed to play hard as hell on day 2.

Day 2 unfortunately started off on a sour note for our A team. With a crossover match against UCSB-A at the start of the day to determine who goes to the gold and silver brackets, respectively, this game was a make-or-break moment for us in this tournament. However, after making the trip to Irvine for the second time, the A team started off with a low-energy warmup that wasn't enough for us to power through a fully-manned UCSB.

In a funny coincidence, the B and C team played each other for their first crossover match on Day 2. Fired up and determined to make the most of the 5-man team, Treasurer Ben Lincoln led the C team to a 22 point run against the B team, but just barely missed taking the set off of them. The second set of that crossover went as expected, with the B team decisively taking the win over the C team to send them to the bronze and copper divisions, respectively.

In silver, the A team walked all over ASU-B and CSUSM to win the silver bracket championships, placing them 5th in the entire tournament.

In bronze, the B team beat UCSB-B 2-0 by a healthy margin in both sets to secure their spot in the bronze championships versus Sac State. After a close first set against them, winning 26-24, the B team cleaned up the job and took home the bronze bracket championships with a 25-17 win in the second set, placing them 9th in the entire tournament. 2 divisions won, 1 more to go.

After a rough day 1, there was a bit of anxiety going into day 2, but after a fiery performance by Ben against the B team, our 5-man C team squad was fired up to take on the copper bracket. We started our first match against UVU-B strong with a small 25-23 win, only to lose the second set 18-25 due to a slight slump in our energy. We used that loss to reignite the energy, and secured our spot in the copper championships against APU. With the A and B team finished, the C team now had the entire program in the stands cheering, and despite being copper championships, it was one of the most energetic and exciting matches of the day. After a hard fight and some great defensive plays from both our block and back row players, our C team took the first set against APU 25-21. However, after more struggling against the APU squad, we just barely lost the second set 24-26. Determined to go home winners though, the C team pulled through in the third set with a clutch 15-13 win. In absolutely exciting chaos, the entire program stormed the court to celebrate the massive copper division win against APU. The 5-man copper-division win will always be remembered in program history as the fantastic C team debut. And as the C team coach writing this article, I want to shout out all of them: Matthew Zabaco, Tommy Sprouse, Aidan Sung, Tommy Le, and Ben Lincoln. 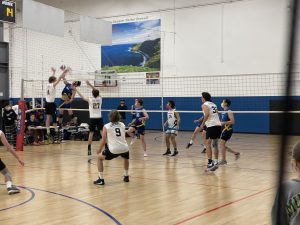