After a long weekend with big stormy conditions, UCSD finished on the podium with 3rd place. The Team's Vice President Noah Brown had the best men's shortboard performance and made it to round 4 using his local wave knowledge at Black's Beach (see photo). Makena Burke won her second straight victory at the season opener event on the women's side, continuing her momentum as the reigning ‘21-’22 national champion. Last but definitely not least, Trent Webster scored invaluable points for the team by placing 3rd in the longboard final, where he triumphed despite unruly conditions. Ultimately, we couldn't have asked for a better start to the season and are eying first place during our next event in December.

After a long and eventful weekend, UCSD finished 7th out of 32 teams. Fourth-year Bronson Wheelan had the best men's shortboard performance making it all the way to the quarter-finals in small and tricky conditions (see picture). Women's rider Kalohe Danbara fought her way to the girl's repechage in her first contest back from studying abroad in France. We are preparing for our next contest on February 18th-19th in Santa Cruz. We hope to finish in the top 5 and have momentum going into Seaside reef for State Championships where we hope to take the crown! 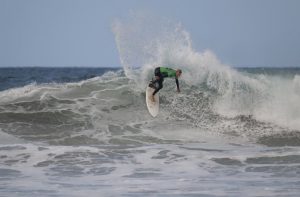