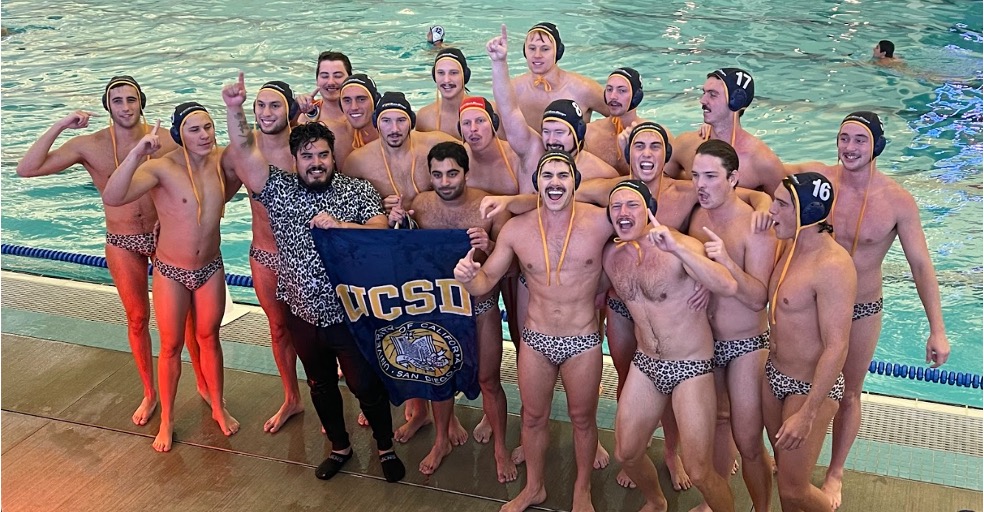 Words cannot really do justice to how long the UCSD Men’s Club Water Polo team has been waiting to say, “We’re #1!” This program has been building towards this since their first national championship appearance in 2013 where they took 9th. The team came back in 2018 and walked away with 5th place. It was at their third national championship appearance in the fall of 2019, where the Tritons ultimately placed 3rd place narrowly losing to the champions that year in the quarter finals. You could tell then; they were hungry for more and wanted the ultimate title of champion. Unfortunately, like most things, the pandemic put that on hold, yet in their 2021 return they climbed again with a silver finish, again losing by 1 point. Anyone who’s been watching this team could tell they were on a mission and that mission was Gold.

The National Collegiate Club Water Polo Championships were held at Chehalem Aquatic and Fitness Center in Newberg, Oregon, and 16 conference winning teams around the US were vying for the chance at being #1. The Tritons had an undefeated season, going into the tournament with a 15-0 record.

Seeded 5th, UCSD’s first game of the tournament was against the 12th seed: Dartmouth. The team set the tone of the game early by scoring ten unanswered goals before half. The final score of the game was 15-5.

Their second game of the tournament was against Berkeley (Cal) ranked 4th overall. This game was highly competitive, and the lead continuously flipped during regulation. Ending in a tie, the teams would face-off in overtime (OT). The Tritons switched into high gear during the first three-minute OT period, scoring four unanswered goals.  Cal was not able to recover during the second three-minute overtime period, launching the Tritons even further towards their goal for gold. The final score of the game was 11-7. READ MORE in the CWPA quarter-final game write up.

The semifinals saw the #2 ranked Tritons face off against the top seeded team of the tournament, University of Michigan (ranked #3). To start the game, the team fell behind 1-3.  However, the Tritons came back by scoring two unanswered goals before the end of the first quarter bringing the game to a tie. After the first quarter, the Tritons created a lead and continued to stretch it until they secured their spot in the Championship with a final score of 14-6. The team wanted to make a statement, and they were not letting anyone take their ultimate prize away this year. READ MORE in the CWPA semifinal game write up. 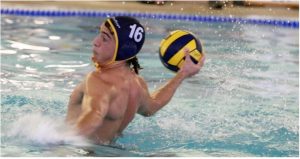 The Tritons final challenge was against #1 ranked California Poly, San Luis Obispo (SLO). Again, they found themselves in a very close and competitive game, as UCSD fell 0-2 in the first quarter. Nothing would be handed to them, and they knew they would need to fight hard and get back into the game.  The team did just that and scored three goals to SLO’s one in the second quarter. Facing a tie once again that continued through the third and fourth quarter, the Tritons were determined to finish what they had started.  With 3 minutes and 34 seconds remaining in the fourth quarter, the Tritons took the lead for the first time in the game brining the score to 6-5. With less than 2 minutes left on the clock, the Tritons scored again. They could almost taste that sweet victory. SLO continued to fight, and while they were able to score once more, the Triton’s defense would not let up leading them to win with a final score of 7-6. Supporters watching in Oregon and via live stream could not have been more proud. They had done it! The UCSD Men’s Club Water Polo Team had finally won the national championship! What a journey and what a fight. They set their sight on #1 from the beginning, and they were not going to stop until they were on top. READ MORE in the CWPA championship game write up.

In addition to being the 2022 National Champions, the Most Valuable Player award was given to our very own Jake Marquez, and the Coach of the Tournament award was given to our dedicated head coach, Hector Sanchez. He was a big part of the momentum change, and he knew what this team was capable of all along.  Parker George, Jake Marquez, and Graham McClone were selected for First Team All-Tournament, and Maxwell Black was selected for Second Team All-Tournament.
The team would also like to thank all the staff, alumni, and supporters who helped them get here. It has been a long journey, and they could not have gotten there alone. We hope this is only the beginning of great things to come for this team and the Sports Clubs program. “31 Sports Clubs, One Team.” Go Tritons!!!