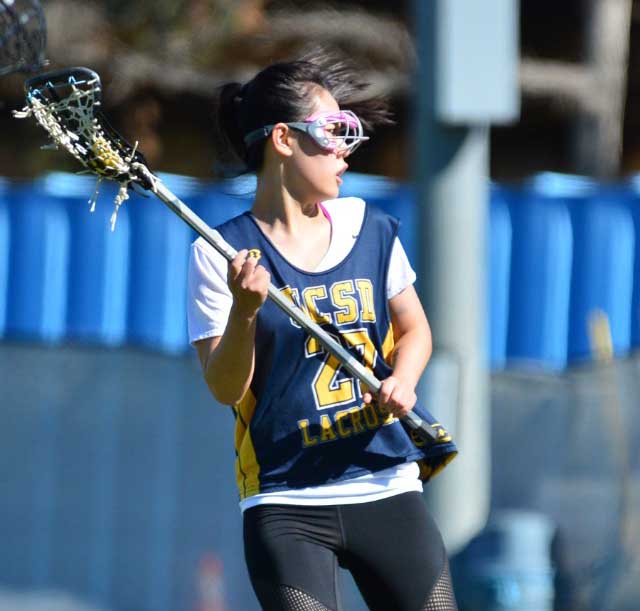 Since its humble beginnings as an indigenous sport of the Native Americans, lacrosse has exploded both in the United States and internationally. The sport, distinct in the fact that players pass and shoot in addition to other movements with a netted racquet, has two versions, the men’s and the women’s game. Two distinct differences between the two games include a lack of contact and very distinct netted racquets which have less of a “pocket” or cavity in the net to hold the ball in women’s lacrosse. Overall the goal of the game is like that of many sports to simply outscore one’s opponents.

This upcoming summer there is something only one UCSD Triton will do, compete in the 2017 Women’s Lacrosse World Cup. Jiyoung Yun, a member of the Women’s Club Lacrosse Team and a first year human biology major from Marshall College, will represent South Korea in the event held every four years. The event will be based in the English city of Guilford, and it will host 28 teams including the United States, England and Canada among other nations.

In addition to playing in the World Cup for the first time, Yun herself will be the youngest of the twenty-one-member team sent by South Korea. Furthermore, before she ever steps on the field in England, Yun will also compete in the Asian Pacific Championship games. This lacrosse tournament which includes teams such as Australia, Hong Kong, China and Japan will act as a warm up for the World Cup while also crowning a winner for the continent. To celebrate her achievement and find out more about her experiences and journey up to this point, we got a chance to catch up with her before one of her last practices of winter quarter. The following is a write up of our conversation:

When did you start playing lacrosse?

How did you get contacted to play for the national team?

“Since the community is so small, it’s not that small but it is small, so all of the players know each other and all of the coaching staff know who is playing lacrosse. There are about 6 college teams and there are about 8 high school teams for women’s lacrosse.”

What first got you into lacrosse?

“My uncle he also played for the national team so I knew lacrosse from him and that is how I first started. I went to a foreign language school and [they] had a team.”

What do you think of UC San Diego so far?

“It’s a very tough school and I have a lot of homework to do, but I like it so far. I like the weather here.”

What position do you play?

What are your goals for the rest of the season with the UCSD Club Women’s Lacrosse team?

“For our team right now we are ranked thirteenth in the nation so we have our tournament this weekend, so my first goal for this week is to win the tournament. After that, for our season, I want our team to be top ranked.”

How about the national team?

I think experience because since I am the youngest on the team right now, I am also expecting [to compete] four years after this at the next World Cup. So this time I will be learning from the other upper players and then after 4 years I might be able to play more as a leader.”

Thanks so much for taking the time to speak with us. It was a pleasure getting to know you and we wish you the best at the 2017 Women’s Lacrosse World Cup!

Since South Korea’s Women’s Lacrosse federation is so small, Yun will have to pay for her ability to compete in the games. As a result, she has created a GoFundMe account to help her achieve her goals. For more information on her mission and an opportunity to support her journey, please visit: https://www.gofundme.com/jiyoungforworldcup

For information on the Women’s Lacrosse World Cup you can visit:

For more information on Lacrosse: http://www.uslacrosse.org/about-the-sport/history