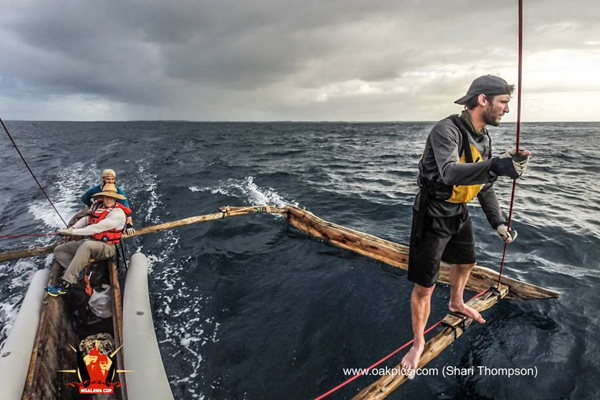 Most people don’t know that Mission Bay Aquatic Center, one of the world’s largest instructional waterfront facilities in San Diego, is owned and operated jointly by us at UC San Diego Recreation and Associated Students at San Diego State University. Last year over 30,000 participants experienced surfing, sailing, wakeboarding, wakesurfing, stand up paddling, waterskiing, rowing, kayaking, and windsurfing. This facility is open to the public, but also offers reduced prices for UC San Diego students on classes, rentals and more!

Here is a great story from our partners over at Mission Bay Aquatic Center about three average guys with little to no sailing experience and a passion for adventure. And how their short-time taking lessons and renting boats help them conquer a race of a lifetime…

At MBAC we get a lot of questions from people interested in learning to sail, but last fall an unusual request came in the form of an email from Jake Vanags. “My name is Jake and, along with two others, I just signed up for a ridiculous and adventurous nine-day race across a portion of the Indian Ocean in a tiny African fishing boat… I guess my question is this: What set of classes or private instruction in the next two and a half months would you suggest we take if we were to sail a tiny African fishing boat over the course of nine days down the Zanzibar Archipelago?”

The race Jake and teammates Chad Vanags and Jeff Williams signed up for was the Ngalawa Cup, a nine-day adventure race through the Indian Ocean on local Ngalawa sailboats. The Ngalawa is made of a hollowed mango tree, two outriggers, and a basic lateen sail. The boats are very similar to those still used by fishermen on the coast of Zanzibar and Tanzania.

As soon as the race was over, we received a simple message. “We won. More info coming soon!” Beating out a number of teams with much more experience, Jake, Chad, and Jeff were the first team to get their Ngalawa to the finish line. While still on the road Jake answered our questions about the race and the preparation they went through to get ready.

WHY DID YOU AND YOUR CREW SIGN UP FOR THIS RACE?

First, I think we all crave insane or unusual adventures because they create the best stories – the ones that impact our lives in some way. Second, the idea of sailing along a spectacular archipelago in an ill-equipped and derelict fishing boat was too much of a beautiful disaster to pass up. Lastly, I actually grew up with a fear of being lost in the open ocean. What better way to conquer that fear than by sailing a boat not meant for the open ocean into the open ocean?

HOW QUICKLY DID YOU REALIZE YOU NEEDED MORE SAILING KNOWLEDGE THAN YOU HAD?

When we filled out our application for the race we had to answer a bunch of questions about our sailing experience. The organizers asked what certifications we had, how many overnight sailing trips we’ve participated in, etc. When I answered “N/A” to all of those questions I thought, “What the hell are we doing?” This was about two and a half months until race day. So, yeah, that was about the point when we started scrambling and freaking out a bit.

WHAT WERE THE MOST USEFUL SKILLS LEARNED FROM MBAC YOU USED IN THE RACE?

Sailing upwind in an Ngalawa is quite a challenge. On the day we overtook quite a few teams, we had to sail straight out and around a big point to the south of us while also avoiding a reef nearby. Unfortunately, the wind was coming straight onto shore. Some teams attempted to paddle out through breaking waves but ultimately got pushed back in. It was quite a dangerous morning with one team’s boom snapping off completely. We ultimately remembered our MBAC training and took the long route, sailing an hour and a half northeast to get out past the point even though we needed to go south. We then started sailing south at around 15 knots (which is extremely fast for an Ngalawa). Even though we added distance to our route by going in the opposite direction, we ended up passing quite a few teams that day.

Avoiding accidental jibes was an important skill on an Ngalawa. In fact, we were told that tacking through the wind on an Ngalawa was near impossible, so there were several times where we would have to do a 270° jibe to change directions if going upwind. One team capsized five times over the course of four days because they were trying to avoid jibing. Also, since we were going with the trade winds much of the time, we were often on a broad reach or a run and if the wind changed slightly, an accidental jibe and/or capsize was likely. Knowing how to right a boat after a capsize was pretty helpful at times.

We spent time on almost every type of boat MBAC could provide. We figured the more boats with different configurations we could practice on, the more comfortable we would be in an Ngalawa. I’d say the Ngalawa was closest to the structure of a Hobie Cat, but with the stability of a Laser. In other words, it’s a big heavy boat with two outriggers but is easy to capsize.

DID YOU FEEL PREPARED WHEN YOU LANDED IN ZANZIBAR?

I don’t think there is truly a way to feel entirely prepared to sail a boat no one in the race had ever set foot on. That said, we kind of jokingly thought our great equalizer was that exact fact – that no other team knew how to really sail these boats. At the end of the day we definitely felt confident with sailing fundamentals, thanks to MBAC, and the fundamentals were all anyone could really rely on.

CAN YOU TALK MORE ABOUT YOUR BOAT?

In general, the Ngalawa is a fishing boat the people of Tanzania and Zanzibar have been using for 1,500 years. It’s made of a hollowed out mango tree and has a heavy canvas sail. It is cumbersome, unwieldy, heavy, and susceptible to falling apart in swells. The boom (usually made of bamboo) is hoisted and hung from the top of the mast. A mast stay is placed from the top of the mast out to the outrigger opposite of the sail. The main sheet can be pulled in tight or lashed out to the spar or outrigger to create a beam or broad reach configuration.

In order to balance the boat on a beam or close reach, one teammate has to stand on the spar opposite the sail so that the boat doesn’t get pushed over. At times I was on the spar for five to six hours straight. In order to jibe, you have to let the main sheet go, untie the mast stay, pull the two bow sheets in, bear hug the sail and boom together, bring all the lines around to the opposite side, reattach the mast stay, and then twist and flip the boom over the top of the mast. All this has to happen while bobbing up and down standing on the edge of the hull and hoping not to rip the sail on the mast or an outrigger.

The hull is basically the size of a big canoe, but often water seeped through weak spots. We had to buy cotton from the locals to constantly plug up the holes. Our mast step and rudder both broke during our training sails. We had to cleverly rig both of them in order to keep sailing to the next location. Some other teams’ boats fell apart completely during crossings because the boats aren’t really made for big swells and tons of pressure on the hull and rudder. The Ngalawa has been around for 1,500 years, but they are still used by the locals daily to fish. It took all three of us to sail the Ngalawa decently, but a ten-year-old local Zanzibari kid can manage it, somehow, by himself.

SOME OF THE OTHER TEAMS HAD CONSIDERABLE MORE SAILING EXPERIENCE THAN YOUR TEAM. WHY DO YOU THINK YOU GUYS WON?

The way The Adventurists races work is that they want you to struggle and fail and test your limits. It’s actually quite an accomplishment to even finish any of their races. That said, luck can play a huge role in terms of how nice your boat is and how the weather treats you. But beyond that, I think the reason we won was because we made smart choices and we didn’t push the boat past what it was capable of. We didn’t overthink or overcomplicate anything, simply because we had such little experience that we didn’t even know how to. We stuck to the fundamentals!

We watched when other teams capsized and then tried not to repeat it. We took care of our boat with preventative maintenance. When we saw something that was starting to fail on our boat, we would stop and fix it. Sometimes it was re-lashing an outrigger; other times it was sewing up growing holes in our sail. If we didn’t catch the problems early, we would’ve paid for it. Once we started sailing competently, we used every hour of daylight we were allowed. We woke up at 4:30am to pack up the boat to get ready to sail by 6:00am (the earliest we could start sailing). We would then push our speed and try to reach the furthest island we could by 6:30pm (the latest we could land). On two out of the final three days, we ended up reaching our target island with only two minutes to spare.

ARE YOU GOING TO KEEP SAILING?

Hell yeah! We loved the race and we’ve already discussed splitting the cost for a starter boat and crewing regattas so that we can gain more experience. There’s already talk of around-the-world sailing. For now, maybe we’ll build our own Ngalawa and take it out on Mission Bay. Just look for the big upside down sail and one guy playing on a balance beam off the side of the boat.

Learn more about the Ngalawa Cup. Interested in your own sailing adventure? Start your journey at Mission Bay Aquatic Center.